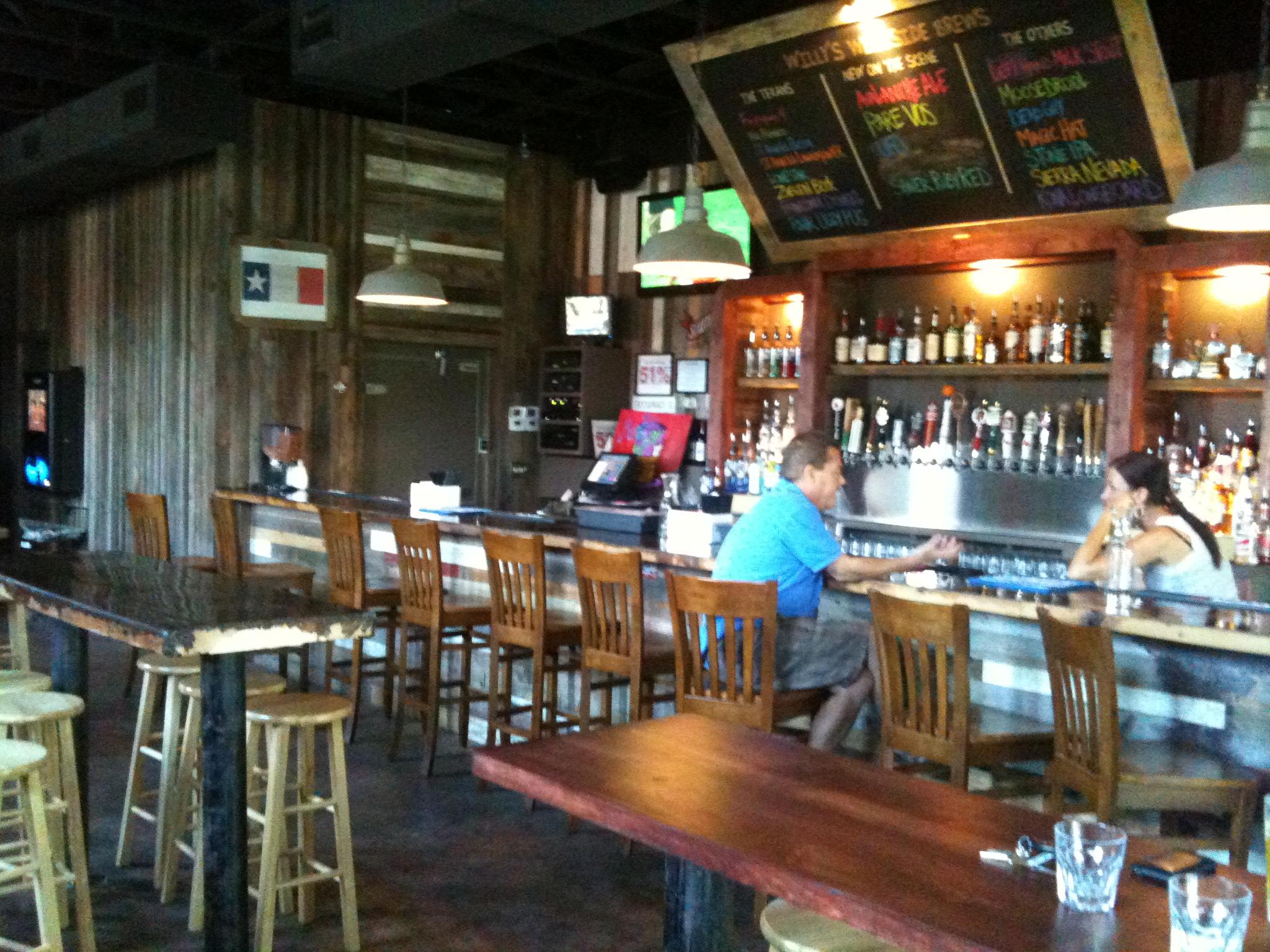 Wired Willy’s is a taphouse that recently set up shop between Poag Mahone’s and 7th Haven.  We noticed the sign earlier this week and thought it was an internet cafe, but to our great satisfaction we learned that it was actually a taphouse that featured Texas beers.  The corner of 7th and Carrol St is now completely comprised of pubs and law offices.

Willy’s gets its name from its free wifi access.  We got the backround story from the owner, Randall Wilcox, who was onsite while we were enjoying our drinks.  He has plans to link their website to the patron’s experience at the bar – creating a type of interactive experience as well, but that plan is still in the works for now.

The inside of the bar has a rustic but classy feel.  Everything is made from reclaimed wood.  The walls are wrapped in it, and the bar and tables are constructed out of large planks.  Some of the wood was reclaimed from a building that was well over 100 years old.  It adds quite a bit of character to an otherwise very basic space.  Randall and his staff of bartenders basically did all the work themselves, and they had the splinters to prove it.

Beer is definitely the focus at Willy’s.  We counted a total of 20 taps, of which half were from Texas craft brewers.  Their beer menu, which was called Willie’s West Side Brews, divided the beers into 3 categories on the menu: the Texans, New on the Scene, and the Others.  In addition to the Texas brews, they had a very unique and eclectic selection of craft beers: Breckenridge Avalanche Ale, Left Hand Milk Stout, Rogue Dead Guy, Stone IPA, Moosedrool to name a few.  Only two beers on draft could be lumped into the domestic category – Ziegen Bock and Lone Star.  They also had a good selection of beer by the bottle as well, including a recent shipment of Wytchmaker Rye IPA by Austin-based brewery Jester King.  Randall let us know that his bartenders made the majority of the decisions based on the beer selection at the bar.  We learned that several of them actually came over from the recently closed Delaney’s Irish Pub across West 7th.

We asked Randall why folks should consider drinking a beer at Willie’s over other spots in town?  His response was their beer selection and customer service.  Although they may not have quite as many taps as a few other places in town, they certainly make the most of what they have with high quality craft beer.  He also wants to create an atmosphere where the staff knows your name and your favorite drink.

We spent the majority of our time chatting with Randall and Greta (the bar manager), but Willy’s also has darts and a jukebox.  There was also a punching bag in the corner – it was about 12 feet in the air so it was only for use by giants.   One of the other unique things about Willy’s is that it is smoke-free. They will be making some updates to the space and adding a few finishing touches, but overall this place is ready to go, so head over and enjoy a Texas craft beer.

NOTE: Depending on your tastes, this bar tends to be a little smoky. With my asthma, its not my favorite feature of this bar but its still a great little joint.