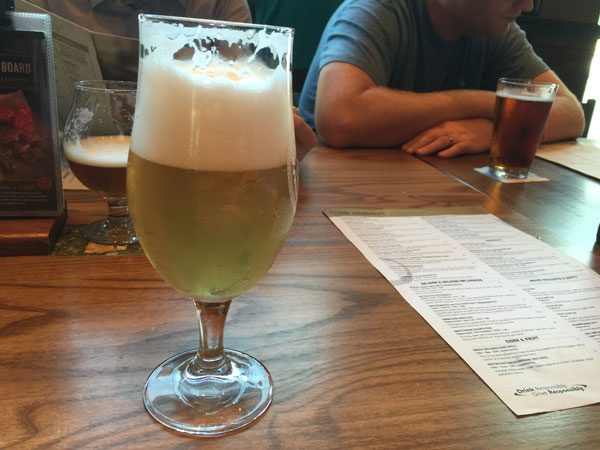 I recently just tried the Independence brewing redbud berlinerweizen. I read by the description it is a lemony wheat beer that is high in acidity. Something that sounded pretty good for trying it during the summer time. Light and refreshing flavors that can accent the nice heat of Texas summers as I make the daring trek from my parked truck to the bar. It’s so hot that the journey from truck to bar alone earned me a beer.

I received the beer and took my first sip. I thought it was a sour to be completely honest. I almost asked the waiter if he got my order wrong. I held out and the longer that I drank it the better it got. I’m happy that I held out because after the initial shock of sour taste my taste buds began to appreciate the complexities. Whether this was due to them learning about the complexities or potentially the first extreme taste killing them I will not know, but it was definitely a beer that I grew to appreciate. Much like a nineties high school movie where the nerdy girl that no one liked at first suddenly got a make over and became the homecoming queen, this beer began to win me over.  I just wish that it had begun that way from the very beginning.

There is a complexity to the beer to be appreciated. The lemony flavor is very flavor forward but relies on the wheat profile to become a Berlinerweisse and round out he beer flavor. I recommend trying it but want to warn about the harsh first flavor. Enjoy!