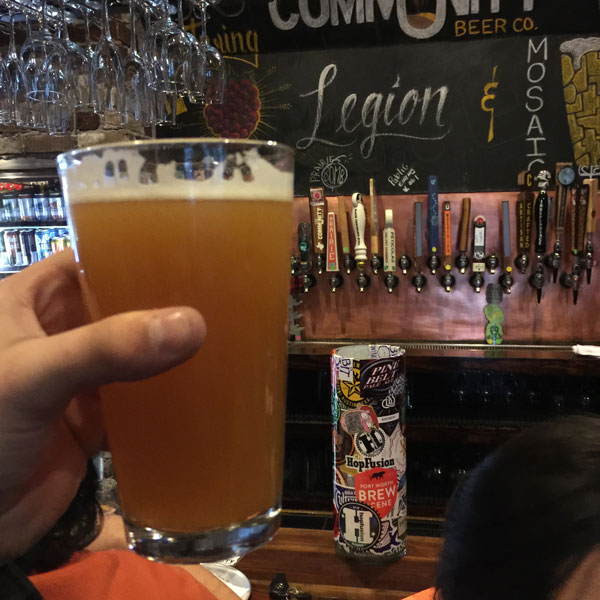 This past weekend I went out with some friends for their birthday party and we ended up at the Bearded Lady where I tried the Community Funnel Cake Ale.

This was an interesting idea from Community, a brewery that I love. The combination of it being from Community and being modeled after Funnel Cake immediately grabbed my attention. Who doesn’t love funnel cake?! It’s delightful. Apparently this ale was brewed originally in 2014 for the state fair to be a beer to have you reminisce over the taste of funnel cake.

While they do try very hard with this, I have to say it wasn’t a success. There were very light flavors of vanilla and bread in it, but not even in a way that necessarily is based on funnel cake. A funnel cake is sweet and satisfying while the flavors that you get in the beer are not. The vanilla taste is not sweet and the beer itself has way to much bitter hops flavor for a beer designed after a dessert covered in powdered sugar.

With the hints of vanilla and bread, this beer could have done well to potentially shift up their recipe to focus more on the flavors that matched with the profile of what they were attempting to model after. If the grain build had been focused more on creating the flavors of a Funnel Cake, it would be more succesful. Adding a little bit more to the bready taste with perhaps a bit of CaraMunich wheat to give a sweet sugary taste that can’t be fermented away. Also completely redoing the hop profile to utilize something much tamer to add to the beer.

I believe that this is a limited release that is no longer actively in production, but if the Community Funnel Cake Ale is attempted again, I hope that it comes back with a sweeter taste to it. And I hope that it does come back because the idea sounds extremely tasty.