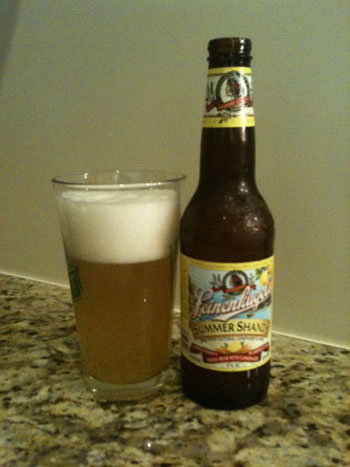 Had a couple of these in my fridge, so I thought it would b fun to review.

Leinenkugel is one of the oldest breweries in America – it opened in 1867!  This particular beer is called Summer Shandy. It is a summer seasonal and is fruit-infused with lemon – actually lemonade flavor.  Leinenkugel loves these infused beer.

Here is what Leinenkugel had to say about the beer:

Leinenkugel’s Summer Shandy® is our take on a traditional German radler. Crisp, refreshing and brewed with natural lemonade flavor, it’s perfect for the sun-splashed summer months.

Here is what we thought:

Appearance: Light and fluffy head that is stark white and 3 fingers in height.  Head disappeared quickly after being poured.  Extremely hazy beer – looks like lemonade (surprise!) – blonde in color.

Taste:  Like a cleaning product. Fake or synthetic lemon flavors fixed with a very watered down wheat beer.  Missing much of the hop and malt flavor that would distinguish it as an actual beer.

Mouthfeel:  Quite effervescent and a bit chalky in the finish.

Drinkability:  It is light and easy-drinking if you enjoy the flavor.

Verdict:  Gimicky beer.  But did you need me to tell you that?  It is lemonade-infused.  Surprisingly little beer flavor to balance the lemon. This Is honestly an easy beer to drink during the summer as a refreshment, but if you are looking for a good beer taste, then this not the beer for you